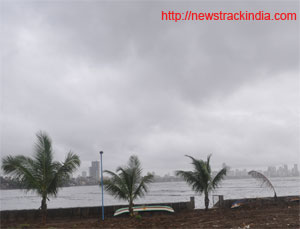 Brihanmumbai Municipal Corporation (BMC)  issued the high alert of 4.51 metres at 11.39 am today, tourists and peoples staying are advised not to go near sea shore.

Due to continued heavy rains on Saturday and Sunday several areas of Mumbai city is now waterlogged. One person also died after a part of slab in garden collapsed on him.

The Mumbai city has also recorded a total of 122.2 mm of rainfall till June 13, which is 4.78 per cent of the average monsoon total. The Regional Meteorological  department has forecast for heavy rains in 24 hours, which further create problems for the people.

According to municipal officers, about a billion rupees is spent each year on bracing the city for monsoon downpours.

Due to high tide alerts peoples are advised not to go near sea shore, several areas has been evaculated.