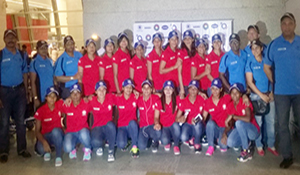 New Delhi, 11 June 2015: The Indian Women National Team departed in the early hours (02:35 am) of this morning bound for Belgium to participate in the all important Fintro Hockey World League Semi-Final 2015, scheduled from 20 June to 5 July 2015, at Antwerp in Belgium.

India is placed in Pool B with Australia, New Zealand, Belgium and Poland and will be playing the opening match against the home team Belgium in their opening match scheduled for 20 June 2015. The 18-member squad, led by Ritu Rani, is aiming high and has been practicing meticulously and bracing up under the headship of their newly appointed Chief Coach Mathias Ahrens.

Speaking just before the departure, Captain Ritu Rani said, “This tournament is extremely important for us. Clinching the title of the FIH Hockey World League Round 2 has boosted the team's confidence and we hope to perform and beat the teams ahead of us on the FIH ranking and which will help us book the all important place in the 2016 Rio Olympics. We have worked on our penalty corner conversions and we are looking at a positive result at the end of the tournament.”

Commenting on the team's preparations, Chief Coach Mathias Ahrens said, “I am confident and we will reap good results. The girls are looking confident as a unit. While we have worked on various strategies, the goalkeepers on their end have been practicing on their reaction time. That I think will be the key as they have to ensure that they do not give away easy goals. The team realizes that the tournament is very important that they are leaving nothing to chance.”

The FINTRO Hockey World League Semi-Final 2015 in Belgium will be played from 20th June to 5th July 2015 and total ten teams, divided in two pools, will be seen fighting to finish in top three to qualify for the FIH Hockey World League Final 2015. India will play their first match against Belgium at 19.30 IST on 20 June 2015.

The FINTRO Hockey World League Semi-Final 2015 will be telecasted LIVE on Star Sports.