Trailer of the upcoming movie 'BROTHERS' 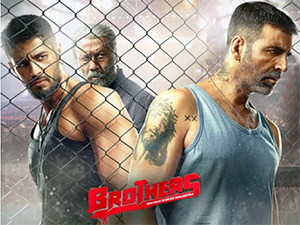 The movie 'BROTHERS' is releasing on 14th August 2015, one day before the Independence day of India.

As the title suggests, Brothers is the story of relationship between two brothers gone awry. It is an intensely physical and emotional face-off on the big stage between the two brothers.

Dated to release on the big independence weekend, Brothers is will see one of the biggest releases this year. Directed by Karan Malhotra and produced by Karan Johar, Hiroo Yash Johar and Endemol India, the film is presented by Fox Star India, In association with Dharma Productions, Lionsgate, Endemol India.

'BROTHERS', heavily equipped with new style of action with international stunt choreographers at the helm, is to hit the theatres on 14th August 2015.