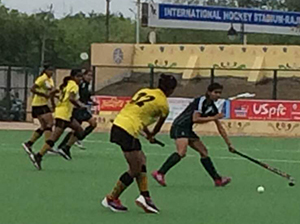 Keeping up the momentum, the teams displayed a skilful game at the 5th Junior National Hockey Championship 2015 (Women) 'A' Division.

Rajnandgaon, Chhattisgarh, 06 May 2015: The top teams continued to put up a spectacular show on the fourth day of the 5th Junior National Hockey Championship 2015 (Women) 'A' Division.

The day started with an exciting clash between Hockey Haryana and Kerala Hockey where the former's dominance declared a thumping win for them over the latter with a 20-0 margin. The second match of the day went in favour of Hockey Karnataka as they defeated Uttar Pradesh Hockey to win 2-1. It was followed by the third match of the day where an interesting clash between Madhya Pradesh Hockey Academy and Chhattisgarh Hockey concluded in favour of Madhya Pradesh Hockey Academy who outwitted Chhattisgarh Hockey 10-0.In the last match, Hockey Punjab declared a convincing win over The Mumbai Hockey Association Ltd 5-0.

The match between Hockey Haryana and Kerala Hockey was a one- sided affair as the former took over the latter with a goal margin of 20-0. Hockey Haryana dished out a spirited performance as they controlled the game from the beginning. The dominating team Hockey Haryana started the proceedings for the day as they scored their first goal in the fifth minute when Manjeet did no mistake and converted a penalty corner. Hockey Haryana increased the lead to 2-0 as Devika Sen very efficiently struck a field goal in the 14th minute. Storming into the Kerala Hockey's circle, Hockey Haryana bagged the third goal coming from the stick of Jyoti in the 23rd minute. In full support of Hockey Haryana Manjeet contributed 4 goals to in the 27th, 39th, 52nd and 55th minute which were followed by the star of the day Neha, who fluently added 7 outstanding goals for Hockey Haryana. Finally, it was the staying power of the Hockey Haryana that titled the match in their favour when a last minute twentieth goal was shot by Udita who concluded the game with a win over Kerala Hockey 20-0.

Concluding the day in favour of Hockey Punjab, The Mumbai Hockey Association Ltd. lost to Hockey Punjab 5-0. The match saw some calculative moves coming from both the sides and the initial opening was taken by Hockey Punjab in the early two minutes of the game through Amrinder Kaur. In the 21st minute of the game, Captain Narinder Kaur struck a beautiful field goal and doubled the lead to 2-0. Hockey Punjab did not stop here and all their attempts to net the ball stood successful when Rajwinder Kaur and Param Jit Kaur struck the goal box in the 41st and 64th minute respectively advancing the lead to 4-0. Without wasting much time, it was Narinder Kaur again who added a field goal in the 66th minute thereby, declaring a win for Hockey Punjab over The Mumbai Hockey Association Ltd. 5-0.