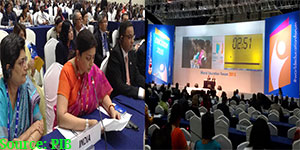 The Press Briefing on Union Human Resource Development Minister Smt Smriti Irani attending the World Education Forum (WEF) organized by UNESCO in Incheon, South Korea was held here in New Delhi today. The Union HRD Minister was in South Korea from 19th May to 22nd May 2015. The Press release was issued during the Press briefing which was addressed by the Secretary, School Education and Literacy, Ms. Vrinda Sarup. The Press Release on the World Education Forum organized by UNESCO which was attended by the Union HRD Minister is as follows:

The Human Resource Development Minister Smt Smriti Irani attended the World Education Forum (WEF) organized by UNESCO, in Incheon, South Korea. The WEF was a landmark of world education leaders, as they met to draw up the world's education goals for 2030. The efforts of the world community to provide education for all which began at Jomtien, Thailand in 1990 and then in Dakar in 2000, had now gathered at Incheon, South Korea to shape the next stage of education agenda for the time frame 2015 to 2030.

Education 2030: Towards inclusive and equitable quality education and lifelong learning for all is the 4th Sustainable Development Goal as part of the new SDGs to be finalized by the UN in September 2015. The WEF expressed its vision to transform lives through education recognising the important role of education as a main driver of development and re-affirmed education as a public good, a fundamental human right and essential for peace, tolerance, human fulfilment and sustainable development.

The significance of the WEF 2015 is in that it seeks to focus the efforts of the nations on access, equity and inclusion, quality and learning outcomes within a lifelong learning approach, which recognises education as key to achieve development and poverty reduction. India through its Human Resource Development Minister played a key role in including in the Incheon declaration two very critical elements for further implementation of the Education 2030 goals. First, the Human Resource Development Minister played a leading role in ensuring that the Incheon Declaration and the Framework For Action emerging from it includes flexibilities for UNESCO member states. Smt Irani's lead won resounding support from majority of the countries present and was duly adopted by the WEF i.e the member states have a contextualised strategy based on their national priorities, resources, capacities and challenges to attain the global benchmarks of Education 2030 in an incremental manner. The Framework of Action would respect the autonomy of member states to plan for and progressively develop annual, intermediate and accelerated targets for meeting the global benchmarks.

The Indian leadership and endorsement of the funding arrangement for the 2030 education goals through a commitment from the developed countries to contribute additional resources (0.7% of GNP) as development assistance to developing countries, especially the least developed countries won wide support and acceptance.

The Minister also participated as a panellist on the thematic debate -- Innovating through technology: Shaping the future of Education wherein the initiatives taken by India to integrate technology in the educational system for ensuring transparency and ease of delivery of educational services were highlighted. The Minister also informed about the portals like Know Your College and School Report Card that provided free critical information regarding educational institutions. The recent initiative of Shaala Darpan that leverages mobile technologies to ensure parents are connected to schools, enabling them to monitor the progress of their children was mentioned along with SWAYAM, the Indian MOOCS platform, and the e-Library and availability of IT-broadband infrastructure in Universities to ensure availability of free world class education for free to anyone interested in learning.

Smt Smriti Irani held several key meetings on the sidelines of the conference in support of the effort to build consensus on the Education 2030 target setting implementation arrangements and monitoring systems. Her initiative saw successful meeting of minds with the E-9 group of the most populous countries, the SAARC group of south Asian countries and the powerful emerging economies in the BRICs group.