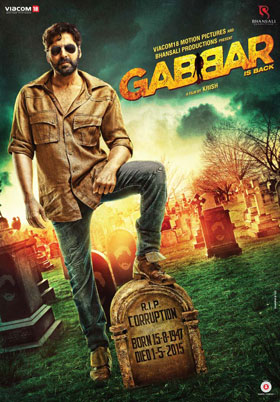 The Gabbar is Back Hindi movie done well on its release date in the box offices and its collection reached around 13.05 crore. This collection is the biggest opening of the year 2015.

Akshay Kumar and Shruti Haasan are the main start of the film and its performance seems good on the first day as it collected 13.05 crore.

One of the most anticipated films this summer, Gabbar is Back has been creating waves ever since the launch of its first poster. From the launch of a teaser campaign that touched a mammoth 1 million grass root level touch-points to a ground-breaking promotional strategy tailor made to engage with the common man has amounted to scores of people cuing up at theatres this Friday.

Setting the box office registers ringing, Gabbar is Back is the biggest Box Office opener of 2015 with a bumper opening of Rs. 13.05 cr. Solid, steady growth in the evening and night shows, confirms that the verdict is out and the masses have given a thumbs up to the film.

Along with Akshay Kumar, the ensemble cast of Shruti Hassan, Sunil Grover, Suman Talwar and a friendly appearance by Kareena Kapoor Khan have all given a power packed performance under the brilliant direction by Krish- who has made his Directorial debut in Bollywood with this film.

Releasing on the day that celebrates the common man, this May 1st release has received a superlative word of mouth. Distributors estimate a good jump day on day through the long weekend for this action packed entertainer, leading to a strong outing at the BO!!