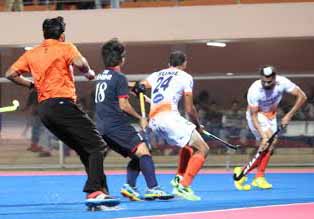 With the series already in their name, India played to add another win to their name while Japan looked at ending the series with one win in their name. It was finally India who stamped its dominance as they went on to win the match 4-0 and claiming the series 3-0. With this India will now be eyeing the FIH World League Semi-Final slated in Belgium next month.

The match started with both teams looking a scoring the initial goal. Halfway into the first quarter, Japan had a real chance as Daichi Kurogawa passed the ball to Ippei Fujimoto in the D, put the later missed the target and losing out on the opportunity score the initial goal. Seconds left into the game Yuvraj Walmiki slapped the ball into the D to SV Sunil but unfortunately for India Sunil could not connect and lost the opportunity, resulting in the quarter being a dry run.

Halfway into the second quarter India had their first chance on penalty corner but unfortunately for India, Rupinder Pal Singh hit off target resulting in missing out on the crucial opportunity. 26th minute and India had their second chance on the penalty corner yet again and this time VR Raghunath taking the flick did no mistake in finding the nets resulting in India taking the lead 1-0. Next minute India broke the shackles of the defence again and Akashdeep Singh scored a brilliant field goal, taking the lead to 2-0.

The third quarter started again in India's favour as they maintain the attack and the pressure on Japan. In the 36th minute India added the third goal when SV Sunil passed eth ball to Dharamvir Singh who entered the D with the ball and slapped it past the goalkeeper giving no chance to the opponents to react. Post that Japan had yet another chance to score as Hiroki Sakamoto slapped the ball but Sreejesh saved yet again for India.