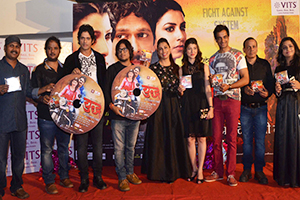 The music for an upcoming Marathi film "Yudh- Astitvachi Ladai" was launched at a fun filled event in Mumbai. Producer Shekhar Gijare and Directed Rajiv S Ruia who are present along with the star cast and the crew. Bollywood Actor Rajneesh Duggal took time from his busy schedule to attend the music launch of the Marathi film. Producer of the film Shekhar Gijare said, “It's a great moment for me to have all the stars at the launch of music as the music of the movie reflects on the life of the youth which inspires them to fight against system.”

Rajneesh Duggal Said, “Marathi industry is growing very fast and I am lucky that I am part of this great music launch. I am very glad to be here for this music launch as it brings me to close to the Marathi culture”.

Director Rajiv S Ruia who is previously been directing hindi movies is now debuting in the Marathi cinema. He said, "Making aMarathi film is a dream come true for me and today I have fulfilled it and I am now a part of Marathi Industry."

Yudh Music is given by Vivek Kar which rightfully describes the fearlessness and boldness of the lead story the 'dhol' beats which adds to the grandeur of the song. The composition introduces the lead protagonist through some trademark zesty and feisty beats have been extensively used throughout the song along with synthesizers. Lyricist Jaffer Sagar has done a brilliant job.