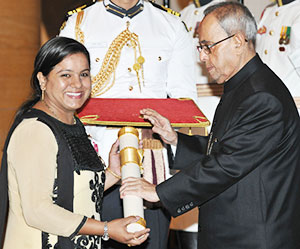 New Delhi, 08 April 2015: Bringing another laurel for Indian hockey, the former India Women Captain Saba Anjum received one of the most prestigious national honours - Padma Shri Award - from Honourable President Shri Pranab Mukherjee at a glittering ceremony at Rashtrapati Bhavan. Saba Anjum was earlier conferred with the prestigious Arjuna Award in 2013. The Chhattisgarh player brought much glory to the country for her contribution on the field and even guiding her team to victories.

Saba was one of the most prominent forwards and represented India during the Asian Games in 2002, Asia Cup in 2004, Commonwealth Games in 2002 and 2006, and Junior World Cup in 2001. Saba has to her credit of being a part of the team which won the bronze at 2006 Doha Asian Games.

She made it to the national squad in 2000 with the U-18 AHF Cup and consistently maintained her position as a good forward striker. She was elevated as skipper of the women's squad in 2011 and during her 15-year-long international career, she scored 92 goals in 200 matches.

Congratulating Saba Anjum, Mohd. Mushtaque Ahmad, Secretary General, Hockey India said, “Hockey India is proud of Saba Anjum for being conferred with the Padma Shri Award today. She has contributed a lot to the women's team and was considered one of the most prominent forward players in the world of Hockey. We are very delighted to see players being conferred the Padma Shri Awards this year and Hockey India takes pride in congratulating both Sardar Singh and Saba Anjum for their achievements.”

A very proud Saba Anjum said, “It is a great honour for me as well as Indian Women Hockey. We are very grateful to the Government of India for recognising the efforts of Women Hockey in this country. I would like to take this opportunity to thank Hockey India for giving me the support which always boosted my confidence.”

Saba is also known for striking six goals including the winning one in the final of Lal Bahadur Shastri Cup 2007 and went on to being the player of the tournament in the series. She was conferred with the Chhattisgarh's top Gundadhur Sports Award for bring honour to her state in the field of sports.