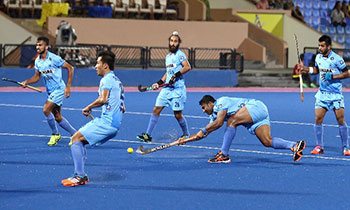 Ipoh (Malaysia), 06 April 2015: After the impressive match against Korea yesterday, Indian team went down post giving a tough challenge to FIH Rank 7 New Zealand as they went to lose by 1-2. New Zealand Captain Simon Child and Andy Hayward goals helped them seal the win while it was Akashdeep Singh who scored the lone goal for India.

The Indian team managed to keep the ball possession from the first minute and penetrated into opponent's D on a few occasions. Gurbaj Singh and Kothajit Singh continuously attacked from both flanks and kept the opponent's defence busy. From New Zealand side, skipper Simon Child and midfielder Ryan Archibald tried to build attacks in the first half but were outclassed by the strong Indian defence.

In the 2nd Quarter, India earned the first Penalty Corner but went in vain as they failed to convert. However, Indians continued their domination and maintained pressure on the opponent till the Half-Time whistle and with 0-0 on scoreboard. In the 3rd Quarter, Indian defender VR Raghunath and forward player Akashdeep Singh took charge of a fast-pace attack on Black Sticks and tried to create opportunities to score goals. But it was New Zealand who managed to take the first lead in 38th minute when striker Shay Neal dribbled past Indian defenders in D and hit the ball towards the goal-box. Simon Child was standing near the box and just gave a slight deflection to ball to score their first goal of the match.

However, the joy for the Black Sticks was short-lived as India scored the equaliser just after five minutes. Team Indian earned another penalty corner in the 43rd minute and Raghunath took the shot, but he hit the ball straight to the goal-keeper Devon Manchester. Akashdeep, who was standing at the goalmouth on a counter attack effort pushes the ball into the net and scores for his team, taking the score to 1-1.

In the fourth and final quarter, India played their rest of their game in New Zealand's half and constantly attacked on the opponent's goal-box. Akashdeep, Gurbaj and midfielder Dharamvir Singh led the attack and tried hard to create opportunities to score the winning goal. But their every attack was thwarted by Black Sticks' defence-line. In the 55th minute, the Black Sticks counter attacked on and managed to earn a crucial penalty corner. New Zealand did not waste the opportunity, as penalty corner specialist Andy Hayward left no chance to convert the opportunity into the winning goal.

The goal helped New Zealand defeat India by 2-1 and adding three more points in their kitty.

India will play its next match against host team Malaysia on 8th April 2015 at 1740 IST.