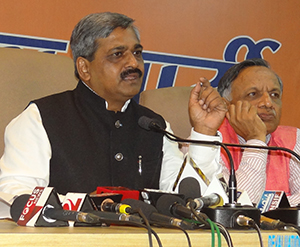 Shri Upadhyay said that in his affidavit filed with nomination paper Shri Tomar had declared that he has a Bachelor's degree and also LLB degree and now both these degrees have been proved to be forged. In such situation his continuance in office is not only immoral also illegal because under the elections laws not only the nomination could be cancelled for false affidavit but if the candidate wins the election and it is proved that the affidavit was false, the then the Election Commissioner is competent to declare the election of winning candidate as illegal.

Shri Upadhyay and Dr. Garg said that Chief Minister Shri Arvind Kejriwal has got thousands of anti corruption hoardings fitted in entire Delhi after spending crores of rupees. In these hoardings he is asking the people to get the corrupt persons punished by submitting video clips. Now when the proofs of educational and political corruption in the case of Shri Tomar have been submitted in the court his silence shows that he is protecting the corrupt Minister.

Shri Upadhyay said that it is a very serious matter because Shri Tomar has been practicing law for a long time in Delhi on the basis of this forged degree and besides being a fraud with his clients it is also an insult of the judiciary. He also said that he has appealed to the Bar Council that stern action may be taken against Shri Tomar.

Dr. Nand Kishore Garg said that he has been highlighting this high handedness of Shri Tomar through the media but now the hon'ble High Court has ensured by appointing a amicus cure in this case that whatever efforts are made by the Delhi Government Shri Tomar cannot escape legal action. He also said that he has also learnt about such other activities of Shri Tomar and he will present to the media after he collects the proof about it.

Shri Upadhyay and Dr. Garg have said that by allowing the person to continue as Minister against whom case of forgery has been reported and affidavits have been submitted by both the Universities, Chief Minister Shri Arvind Kejriwal has proved that his claims about political morality is hypocrisy.

Shri Upadhay added that if Shri Kejriwal does not dismiss Shri Jitendra Singh Tomar then the BJP will initiate agitation on this issue.