Music of the movie 'Ishqedarriyaan' launched 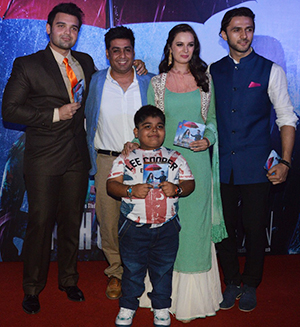 In addition present in support were Mahakshay's siblings (Mithun Chakraborthy's children) brother Rimoh Chakraborthy - who was also an AD on the film, brother Namashi Chakraborthy and sister Dishani

Chakraborthy. In addition, the event was attended by Marathi film actor Sachin Khedekar, cinematographer Ravi K Chandran, actor Ravi Khemu (Kunal Khemu's father) among others who are friends of the director.

Mahakshay and Evelyn performed a special duet that they prepared for the media on the title track of the film of the film followed by a singing performance by Asses Kaur on the song called Mohabbat Yeh.

The music, released by Zee Music got a rave response from members of the media and all attendees. The film releases pan India on May 15