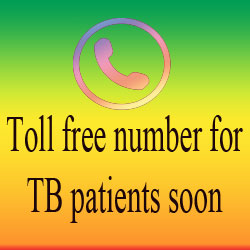 The Union Minister for Health & Family Welfare Shri J. P. Nadda today announced that a toll-free number will be launched soon to reach out to all suspected TB patients for counseling and treatment. Sh. Nadda made this announcement after launching ‘Call to Action for TB Free India’, here today.

“In addition to this number, we will use mobile and other telecommunication tools in an innovative manner in this programme,” added Sh. Nadda.

“We are working on getting the toll free number launched as soon as possible. Currently preparations and training is going on at the state level in this regard,” informed Sh. Nadda. He said the patients would be able to call on this toll free number for any support and information they seek regarding TB. Even a missed call will suffice, the Health Minister informed. Based on the call received, the Ministry team will reach the person who had made the call, check his or her status of TB and ensure the person is covered in the programme to get correct diagnosis, free drugs, treatment and follow-up.

The Health Minister stated that one of the biggest challenges faced by the TB Control Programme is in reaching out to the TB patients. The toll-free services will help the patients to be incorporated in the TB Control Programme. The Health Minister also informed that a massive mass awareness campaign through multi-media campaign will be taken up as part of the Call to Action for a TB Free India. He appealed to various stakeholders across the private sector, civil society members, experts, doctors, patients and caregivers to be part of the movement to make India TB free. The Call to Action is not merely a slogan, Shri Nadda said. It is a movement to galvanise all stakeholders for a common shared commitment.

The Health Minister stated that to achieve the vision of TB Free India, the Ministry will ensure 90% coverage of BCG under the Mission Indradhanush; reach out to the unreached; diagnose all TB cases within two weeks of symptoms and refer to the nearest public health center; employ extensive use of rapid diagnostic kits and active screening of high risk population; and ensure treatment completion. The Minister added that efforts will be made to match international cure rates for MDR and XDR TB. It is important to have a rigorous follow up of treatment and ensure free treatment at the doorsteps, he stated. “We will also encourage research in new drugs and new drug regimes in order to achieve better regimens with shorter duration”, Shri Nadda stated, in addition to promoting indigenous development and manufacturing of diagnostic tests under the “Make in India” programme. Emphasis will be laid on provision of comprehensive healthcare to TB patients. The Ministry will also work out schemes to incentivize patients to help complete therapy, coordinate with other ministries to ensure linking of TB patients and their families to various welfare schemes of the Government so that the earning of these families increase to enable them to have nutritional support which will enhance the immunity status of each member of the family.

Secretary (H&FW) Shri B P Sharma stated that despite the challenges, India has achieved significant success in its TB Control Programme- nearly 2 crore patients have been cured and about 3.2 million lives have been saved. He stated that the “Call to Action” will prove to be catalytic in synergizing efforts of various stakeholders towards a common shared goal.

Also present at the launch function were representatives of WHO, USAID, The Union, STOP TB Partnership, Global TB Program of WHO, the US Embassy and other stakeholders.