Musical Jukebox from 'Gabbar Is Back' is Live Now 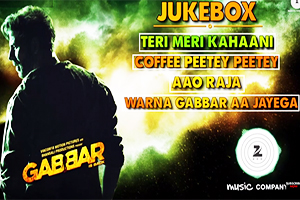 Mumbai, April 20, 2015: The music jukebox for Akshay Kumar's upcoming film 'Gabbar Is Back' has been released. The video features chartbuster tracks like 'Teri Meri Kahaani' and 'Aao Raja' along with various other songs from the film. 'Teri Meri Kahaani' sung by Arijit Singh & Palak Muchal has been loved by all from the industry and the audience as well. 'Aao Raja', currently Bollywood's hottest track, is sung by Neha Kakkar and Yo Yo Honey Singh. The other songs are 'Coffee Peetey Peetey' and 'Warna Gabbar Aa Jayega' sung by Dev Negi, Paroma Das Gupta and Manjeet Ral & Rap - Raftaar respectively.

Complete with songs ranging from soothing, heart-touching numbers to peppy beats, the album is sure to rock the music world. The audio jukebox gives the audience a chance to listen to music composed by Chirantan Bhat, Yo Yo Honey Singh and Manj Musik. The music of this much-awaited film is ready to take listeners on a melodious journey.

'Gabbar is Back' is directed by famous director from the South, Krish and produced by Sanjay Leela Bhansali and Viacom 18 Motion Pictures. Featuring Akshay Kumar in the title role alongside Shruti Haasan, the film is slated to release on May 1, 2015.

View More : 'Gabbar is Back'