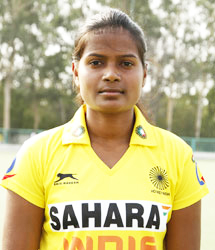 New Delhi, 17 April 2015: India's clash against New Zealand yesterday at the Hawke's Bay Cup 2015 marked the 50th International match for Sunita Lakra, who as a defender has been a great asset to the Indian Women team and has delivered at all crucial matches for the country.

Making her International debut in 2009, Sunita Lakra has been the backbone of the team since then and even been part of important tournaments like the 17th Asian Games and the recently culminated Women's Hockey World League Round 2.

Congratulating her on the feat, Secretary General Hockey India Mohd Mushtaque Ahmad said, “We congratulate Sunita on her achieving this landmark feat and we hope to see her continue in this manner for the upcoming tournaments and attain the magic figure of 100 soon. We wish her all the best for her future and would like to tell her that she is an asset to the team and the country."

Presently part of the Hawke's Bay Cup 2015, Sunita continues to show her form and good play as she keeps the opponents attack at bay.