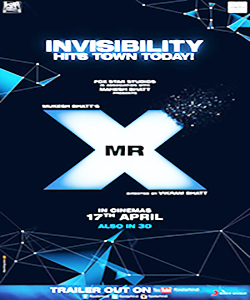 Mumbai, April 16, 2015: The television premiere deal for the Emraan Hashmi- starrer 'Mr. X' has been inked for approximately 25 crore, the highest for an Emraan Hashmi film this far.

The film's satellite rights fetched the whopping amount just before the release, given that the action-entertainer got a 'U' certificate and is certified as a clean-entertainer for family satellite viewing.

Confirming the news says producer Mukesh Bhatt, "Yes, this is the first time that we have got a huge amount for Emraan's film. It is a family entertainer. So we really did not have to make any cuts for television viewing”.

Mr. X is an upcoming Indian Hindi movie which is a 3D sci-fi thriller film. This film is directed Vikram Bhatt, written by Shagufta Rafique, and produced by Mukesh Bhatt.

The stars in the film are Emraan Hashmi and Amyra Dastur.