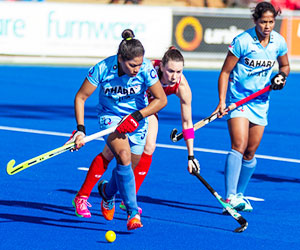 Hastings (New Zealand), 12 April 2015: After giving a tough fight, Indian eves went down to USA by 2-4 in the second match at the Hawke's Bay Cup being played at Hastings Sports Park, New Zealand.

From the very first minute, both the teams played a calculated game through-out the match and struggled hard to keep the possession of the ball as both the teams were not allowing each other to take advantage of any scoring prospects.

The first quarter started with intense tussle between the teams and it was India who took the lead and opened its account through Anuradha Thokchom in the sixth minute of the match, taking the lead to 1-0. After conceding the goal, the USA managed to keep ball possession on their side. However, the Indian defence stood tall and the score remained 1-0 in favour of India.

As the second half commenced, the USA girls started playing with better strategies. Four minutes into the second quarter, Jill Witmer was quick to retaliate on the goal-line through a field effort in the 19th minute, which resulted in a well-deserved 1-1 equaliser. Both the teams persistently to put pressure on the other side and displayed a good set of stick work. With the either teams unable to add any further goals to their account in the second quarter, the score card remained unchanged by 1-1.

In the third quarter the game entered an hard-fought phase, but failed to convert any opportunities in goals. The dying minutes of the quarter saw some action as USA's Kathleen Sharkey finally broke into the D twice and scored two back-to-back goals in the 42nd and 43rd minute for his team, advancing the lead to 3-1. With an aim to reduce the margin, India's Anuradha Thokchom scored the second goal for India in the 44th minute through a penalty corner conversion.

In the last quarter of the game, both India and USA were seen attacking the flanks more frequently but it was USA who got another success in the 47th minute from the stick of Julia Reinprecht and gave another jolt to India. Unfortunately, Indian eves failed to add any more goals to the game and USA won the match by 4-2.

The matches will be LIVE Streamed on www.hockeyfestival.nz.