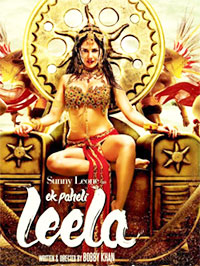 Earlier the trailer of the movie 'Ek Paheli Leela' was also very popular.

"From a royal princess to a glamorous model from London", Sunny Leone has been seen in many different avatars in her much awaited musical saga, Ek Paheli Leela which released across theatres yesterday. And we hear that Sunny's unusual and hatke character is being appreciated by one and all.

Her huge number of fans are loving the unique reincarnation story of red hot Leela, Sunny Leone who is going back 300 years in the film and a modern day avatar of a model Meera has been receiving rave reviews for her performance.

The actress has been seen in a completely different look in Leela, which no one would have anticipated. So far Sunny has played only seductive and modern girl roles in most of her movies. Ek Paheli Leela will see Sunny in the role of a commoner, becoming a princess in the early era and her modern day look.

The film has a staggering number of 9 mellifluous songs which makes it a musical saga and boasts of some stellar singers and composers who have brought together these fantastic tracks. The songs have been composed with creativity and flair catering to all types of musical lovers out there.