Working on strengthening our defence chain for the Hawke's Bay Cup 2015: Savita 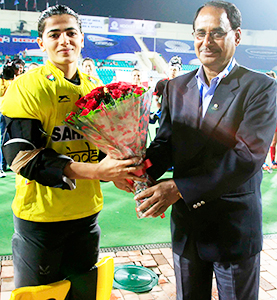 New Delhi, 25 March 2015: With just a couple of days left for the upcoming Hawke's Bay Cup 2015, New Zealand to start, Indian Women Hockey team was seen brushing up their skills in the ongoing preparatory camp at Major Dhyan Chand National Stadium in New Delhi. The tournament is scheduled to start from 11 April 2015 -19 April 2015.

Following their laudable victory in the recent Women's Hockey World League Round 2, the Indian eves looks positive and encouraged to give up a similar performance this time around. Packed with confidence, Ritu Rani's led team is putting extra efforts by displaying and employing the best of their skills and proficiency and is ready to showcase a gritty performance ahead.

Speaking on the impending tournament Goalkeeper Savita said, "Our defence was upto the mark at the just culminated World League Round 2 and we are looking at repeating a similar performance in the upcoming tournament and we are aware that the opponents will be different and more experienced. But we are confident that we can keep them at bay and this will be possible by attacking the opponents D. We are even working on strengthening our defence chain and that will be the key for us to counter attack."