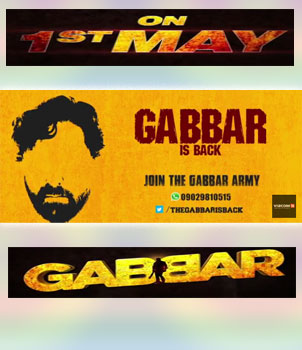 The trailer of the upcoming movie Gabbar is Back crossed 1 lakh view marks and views are still increasing.

The trailer of the upcoming Hindi action drama movie is release on the Youtube video sharing website. film directed by Krish and produced by Sanjay Leela Bhansali.

The film will be distributed by Viacom 18 and it will be released in Hindi. The scheduled release date of the film is 1 May 2015.

In this film Akshay Kumar in the title role. This film is a remake of 2002 Tamil film Ramanaa.

In the 'Gabbar is Back' moive; Shruti Haasan, Prakash Raj, Sonu Sood and Nikitin Dheer will appear in supporting roles.

The music of the are composed by Chirantan Bhatt, Yo Yo Honey Singh.

Casts of the Gabbar is Back Hindi Movie

Official Trailer of the movie 'Gabbar is Back':

The movie 'Gabbar is Back' is the story of Gabbar (Akshay Kumar) and in the movie Gabbar starts the Anti-Corruption Force (ACF) that seeks to track down and eliminate corrupt people from society.

This movie is scheduled to release on 1 May 2015, in Hindi all over the India in Box offices.