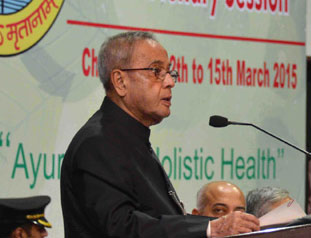 Demystify and popularise Ayurvedic medicine, for too long has Ayurveda been dismissed as an 'unproven' discipline, says President, while inaugurating the  58th Session of the All India Ayurvedic Congress at Chandigarh on March 14, 2015.

The President of India, Shri Pranab Mukherjee inaugurated the 58th Session of the All India Ayurvedic Congress at Chandigarh today.

Speaking on the occasion the President said Ayurveda should not be regarded as merely a system of healthcare. It is, rather, a set of disciplines that work together to create balance and harmony within us. It is based on the perception that life represents a relationship between the atma or soul, mana or mind, indriya or senses and sarira or body. It is a unique combination of science and philosophy for balancing the body’s physical, mental, emotional and spiritual components. Ayurveda doctors believe that this equilibrium is necessary for good health. Creating such a balance helps to heal the sick, maintain the health of those who are well, prevent disease and promote quality of life.

The President said in India, most of us consciously - or as a matter of traditional practice - are relying on Ayurveda in our daily lives. Even those of us who are not formally trained in Ayurveda have embraced its principles in our dietary preferences and day to day routine. In all the diverse cultures of the different regions of India, herbs, spices, plants, leaves, flowers and oils, in countless combinations are prepared by households and administered as preventive supplements or medicinal remedies for addressing ailments - big and small. There is, for example, a specific reason for turmeric to be a key ingredient in our everyday food; the tulsi leaf is, similarly, incorporated in the holy water or charan amrit consumed after daily prayers and ghee made of cow’s milk has been a staple cooking medium down the ages. Due to the simple nature of the ingredients in Ayurvedic remedies, many of us prefer to rely upon Ayurveda to avoid the harmful side effects of modern medicine.

The President said it is unfortunate that Ayurveda, as a science, had been suppressed for a long period when India was under colonial rule - due to which training and education in this ancient science suffered. For too long has Ayurveda been dismissed as an ‘unproven’ discipline. Ayurvedic medicone should be demystified and popularized through marketing and user friendly packaging. Mobile clinics should deliver Ayurvedic treatment and medicine in villages across India. The President encouraged the youth of India to study, safeguard, practice and propagate this ancient knowledge system.

The President said it is believed that centuries ago, the medicinal systems of Ayurveda and Siddha had laid down protocols for successfully treating diseases that resembled the diseases that we know today as HIV and tuberculosis. If these remedies could be researched and the findings pursued, they could bring new hope to millions and revolutionize modern medicine. He called for greater collaboration between ayurvedic and allopathic researchers to widen the database of treatment protocols and successful medical practices for the benefit of people. He also called for channels of direct connectivity to be established between Ayurvedic laboratories and drug manufacturers. He encouraged hospitals all over India to add the facility and service of Ayurvedic treatment in whichever way they can.

The President expressed the hope that deliberations at the 58th Convention will serve to give a new impetus to the awareness and practice of Ayurveda and enhance its relevance in contemporary society by simplifying and popularizing Ayurveda through modern scientific interventions.