Pranab Mukherjee: Ayurveda is a science 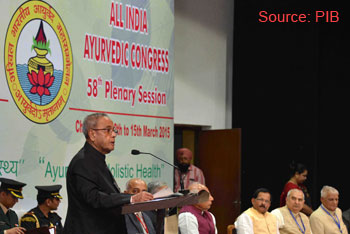 President added "Ayurveda, as a science, belongs to India. It is the oldest surviving system of medicine in the world. Its origins have been traced back more than 5000 years."

Ayurveda is the oldest science of the Medicine and the information about Ayurveda can be found in the Vedas. He added " Chinese scholars were studying medicine in India at the University of Nalanda".

Here is the complete speech of the President, Pranab Mukherjee at the 28th Session of the All India Ayurvedic Congress.

Speech by the President of India, Shri Pranab Mukherjee at the 58th Session of the All India Ayurvedic Congress in Chandigarh

1. It is indeed a privilege to address this distinguished assembly of Vaidyas and practitioners of Ayurveda. I would like to, first of all, congratulate the All India Ayurveda Mahasammelan and Vidyapeeth for organising this 58th All India Convention on Ayurveda and providing an important forum for the experts in this field to exchange views, deliberate on the modern application of this ancient science and collectively address the task of promoting its use.

2. Ayurveda, as a science, belongs to India. It is the oldest surviving system of medicine in the world. Its origins have been traced back more than 5000 years. It is believed that the concepts of Ayurveda were known to the people of the Indus Valley Civilization. The science was significantly developed during the Vedic period of our history. In fact, the main source of knowledge in this field are the Vedas - particularly the Atharvaveda believed to have been written around 1000 B.C. We know that in the 5th Century the erudite treatises of the greatest of our Vaidyas, Sushrutha and Charaka were translated from Sanskrit into Chinese and in 700 A.D. Chinese scholars were studying medicine in India at the University of Nalanda. By the 8th Century, these texts were translated into Arabic and Persian. We see that Arabic works derived from our Ayurvedic texts reached Europe by the 12th Century. Today, it is a matter of satisfaction that Ayurveda has not only sustained itself in many of the countries of South Asia, but is also popular across the seas in some of the countries of Europe and in the United States of America.

3. In India, most of us consciously - or as a matter of traditional practice - are relying on Ayurveda in our daily lives. Even those of us who are not formally trained in Ayurveda have embraced its principles in our dietary preferences and day to day routine. In all the diverse cultures of the different regions of India, herbs, spices, plants, leaves, flowers and oils, in countless combinations are prepared by households and administered as preventive supplements or medicinal remedies for addressing ailments - big and small. There is, for example, a specific reason for turmeric to be a key ingredient in our everyday food; the tulsi leaf is, similarly, incorporated in the holy water or charan amrit consumed after daily prayers and ghee made of cow’s milk has been a staple cooking medium down the ages. Due to the simple nature of the ingredients in Ayurvedic remedies, many of us prefer to rely upon Ayurveda to avoid the harmful side effects of modern medicine.

4. It is unfortunate that Ayurveda, as a science, had been suppressed for a long period when India was under colonial rule - due to which training and education in this ancient science suffered.

5. Fortunately, in post-Independence India, both our Central and State Governments have taken a number of steps to revive this invaluable treasure of ancient medicinal secrets. Government of India has, today, a full-fledged Ministry of AYUSH for the development and promotion of Ayurveda, Yoga & Naturopathy, Unani, Siddha and Homoeopathy. This Ministry has been working with the practitioners of our indigenous medicinal systems to develop and strengthen education and training in these sciences. The Sushruta Samhita and Charaka Samhita are now available to students in Hindi and English. I am confident that such efforts will significantly encourage the development of Ayurveda in our country and abroad.

6. I would like to emphasise that Ayurveda should not be regarded as merely a system of healthcare: it is, rather, a set of disciplines that work together to create balance and harmony within us. It is based on the perception that life represents a relationship between the atma or soul, mana or mind, indriya or senses and sarira or body. It is a unique combination of science and philosophy for balancing the body’s physical, mental, emotional and spiritual components. Ayurvedic doctors believe that this equilibrium is necessary for good health. Creating such a balance helps to heal the sick, to maintain the health of those who are well, and to prevent disease and promote quality of life.

7. For too long has Ayurveda been dismissed as an 'unproven' discipline. I would like to see Ayurvedic medicine being demystified and popularized through informative marketing and user friendly packaging; I would like to see the day when we have mobile clinics delivering Ayurvedic treatment and medicine through the villages in all parts of India. I would particularly like to encourage the youth of India to study, safeguard, practice and propagate this ancient knowledge system.

8. It is believe that centuries ago, the medicinal systems of Ayurveda and Siddha had laid down protocols for successfully treating diseases that resembled the diseases that we know today as HIV and tuberculosis. If these remedies could be researched and the findings pursued, they could bring new hope to millions and revolutionize modern medicine. To achieve this, I would like to see greater collaboration between ayurvedic and allopathic researchers to widen the database of treatment protocols and successful medical practices for the benefit of our people. It would also be appropriate to establish channels of direct connectivity between Ayurvedic laboratories and drug manufacturers. Some modern hospitals are additionally offering Ayurveda in the name of integrative medicine. I would definitely encourage hospitals all over India to add the facility and service of Ayurvedic treatment in whichever way they can. In the same context, the importance of Yoga has been acknowledged for protecting health and curing disease. This year, the United Nations adopted without a vote, a resolution, declaring June 21st as International Day of Yoga, recognizing that "Yoga provides a holistic approach to health and well being". As Yoga and Ayurveda are complimentary to each other - and the practice of Yoga can increase the beneficial effects of Ayurveda – a combination of yoga and ayurveda can go a long way in giving good health and preventing disease.

9. I am confident that the deliberations at this 58th Convention will serve to give a new impetus to the awareness and practice of Ayurveda and enhance its relevance in our contemporary society by simplifying and popularizing it through modern scientific interventions.

10. With these words, I once again congratulate the organizers of this conference and convey to them my best wishes for its success.