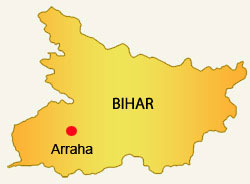 There are reports of a powerful bomb explosion inside the premises of a civil court in Bihar's Ara district. According to the TV reports 3 people died in the explosion.

According to the Media reports among the three died one said to be was the Bihar Police constable.

Several people has been injured in the blast. Injured people have been rushed to the near by hospitals.

The nature of the blast is yet to be ascertained by the officials.

Police and officials are thoroughly examining the blast site.