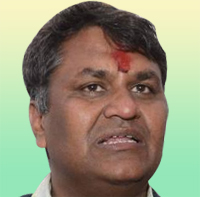 In a simple function organized in the capital, Delhi BJP chief Satish Upadhyay welcomed the former AAP leader into the party fold during a news conference here.

On the occasion, Delhi State BJP chief Satish Upadhyay said that Vinod Binny was the first to raise his voice against undemocratic processes in AAP.

On the occasion, Binny blamed Arvind Kejriwal for his working style and said that the AAP chief lied to the people of Delhi and played with their emotions.