'Margarita, with a Straw' trailer released 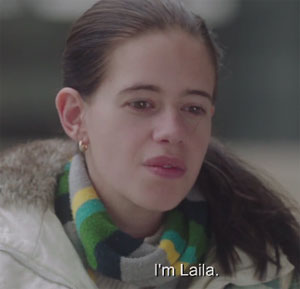 Mumbai, September 12th, 2014: The official trailer of the upcoming movie is released today and it can be viewed on the youtube video sharing website.

The movie will be released on 8 September 2014 in Hindi and English.

With the official trailer of the movie ‘Margarita, with a straw’ having gone live today, the true blue cinema lovers are in for a treat. Starring the super talented and versatile Kalki Koechlin, this movie has elements that make for a liberating, and mentally stimulating cinema watching experience. Margarita, With a Straw is a film about a young romantic rebel in a wheelchair who embarks on a breathtaking journey of self-discovery.

Produced by Viacom18 Motion Pictures, Jakhotia Group, Ishan Talkies and ADAPT, and directed by the acclaimed Shonali Bose, the movie was recently premiered at the Toronto Film Festival and received an overwhelming response as well as a standing ovation. The film is not only intricately nuanced but also depicts a wide array of emotions that struck a chord with the viewers who saw the screening at TIFF.

Viacom18 has in the recent past produced many movies that are women led and content heavy. Their foray into this category of cinema has been very well received by the audience and the success of movies like Kahani, Queen and Marry Kom says it all. Margarita with a Straw is another addition in the list, however, this script is a never before touched topic. With reviews like “A gorgeous coming of age story. So subtle and true.” Jose Rivera. Writer, The Motorcycle diaries and “A subject rarely seen in film, told with insight and humor” Paul Federbush, Sundance institute, this film already has a lot of excited viewers waiting for the release.

The trailer opens beautifully with a disabled Laila applying lip gloss with shaky hands and hoping to live her dream of being with a man, and goes on to reveal her journey to seek love and acceptance. Paving the path for a new wave of cinema, Margarita, With a Straw will break all stereotypes of women led films, bringing forth a bold character that has never been seen before on the silver screen – and yet, at the same time is utterly relatable.

The film addresses cerebral palsy, death, and sexuality, without superficiality, and while many films may exploit these topics, this movie offers a fresh and much needed take.