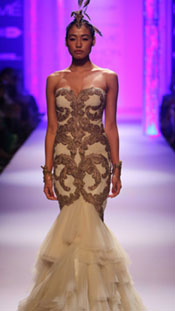 In an impressive show, the designer Shantanu and Nikhil presented his glorious collections Himalayan in the ongoing Lakme Fashion Week Winter/Festive 2014 which was widely appreciated by the audience. The Himalayan Couture Collection presented giant columns on the stage set the mood of the Himalayan show and the 39 beautiful creations that enthralled the audience.

The Shantanu and Nikhil collection inspired by the colours and charm of the Himalayan waters spoke of rare beauty. Visualised by the majesty and serenity of the Himalayas, the free-spirited but couture line had timeless beauty and elegance.

The collections were widely appreciated and praised due to its magnificent making. Apart from this, the offering couture wear, the silhouettes incorporated creative construction and intriguing fabric cut-outs on a colour story that had dramatic grey, white, deep red, blue and black for the luxurious fabrics like chiffon, georgette, tulle and organza.

Moulded silhouettes were seen in New Age lehengas and Anarkalis, while tone-on-tone draped sari-gowns were regal in form and structure, but cocktail gowns were voluminous as they sailed down the ramp.

The design and attire presented by Nikhil and his team regarding the men's wear had sharp distinct cuts with an interesting pairing of round skirts for sherwanis, bundgalas, kurtas with bundies, an interesting printed sherwani and a set of side draped kurtas worn with fluid skirts added a new dimension to men’s wear. The final red/black shaded sherwani was eye catching.

The almost Mohawk like jewelled headgear, the facial ornaments and lavish jewellery was just the ideal addition to the collection.

Super model and dancer, Jesse Randhawa floated in a white will- power textured gown with tantalizing 3D embellishments to end the superb show.