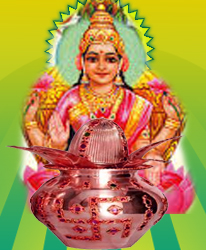 Akshay Tritiya is an auspicious occasion which brings an everlasting happiness, prosperity and peace in the family. According to traditional Hindu counting, Akshay Tritia comes on the third day of Vaishakh Month which clearly displayed by the term 'Tritia'. It is so important muhurt according to Hindi traditions and culture, and people believes that any ventures started on the very day returns glorious output in future. Apart from this, there are various reasons for which people choose the date to invite wealth and prosperity on Akshay Tritia.

There are many more reasons behind the importance of Akshay Tritia for our prosperity. It is said that Lord Parshuram, who is considered to be the sixth incarnation of Lord Vishnu, was born on that very date and hence people celebrate Akshay Tritia.

Another significant reason which provides a solid reason to celebrate the day is that Lord Krishna had freed his childhood friend Sudama from his poverty and provides prosperity on the day of Akshay Tritia.

Hindu methodology said that the date is very crucial for the peace, prosperity and happiness point of view for a family and so one should celebrate this wisely. As it has been said that any precious thing bought today provide more happiness and prosperity for a long time and hence people utilize the moment.

What to buy on Akshay Tritia: Needless to say, we should planned to buy such things on the eve of Akshay Tritia which remains forever and everlasting. Generally people prefer to by Gold related item on the very day.

However people prefer to worship Goddess of wealth, Mahalakshmi and Lord Vishnu for their prosperity and happiness and thus they can attune Shree Yantra on this day.

Lord Kuber, known as the lord of wealth is also worshipped on the Akshay Tritia and people can attune Kuber Yantra on the very date to achieve the blessings of Lord Kuber.

Astrological aspects: As far as the astrological point of view is concerned, Akshat Tritia has also a strong reason to celebrate. It is said that planet Venus, which is considered to be the lord of wealth and happiness, it moves into Taurus in its own sign and it creates a unique combination on the day of Akshay Tritia.