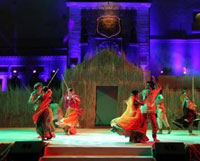 The famous World Living Heritage Festival 2014 (WLHF 2014) celebrates the many colors of life and the various shades of cultural diversity which the Mewar region has to offer. It is a four day long festival which will be held from 13th -16th March 2014, Udaipur. Udaipur and the City Palace are known to be the hubs of heritage conservation and that is why this unique event takes place here. The event will feature photo exhibitions, panel discussions, a book launch, sound and light show among others. A musical concert will bring the activities to a close every day.

Shriji Arvind Singh Mewar, the 76th custodian of the Mewar dynasty in Udaipur, who has been the driving force behind this festival said, “Our heritage is something that each one of us is proud of. It is not enough to just say it but also take a step towards preserving it for generations that follow. We believe in the concept of ‘Living Heritage’, which is our guiding light. The World Living Heritage Festival 2014 is a step in this direction. We are optimistic this event will prompt the participants and attendees both to take up the cause of heritage conservation.”