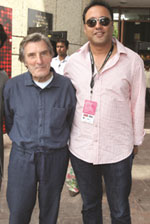 The 81-year old guru, who is known as Paris’ ‘Prince of prints’ in the 70s; was seen enjoying the shawls and stoles at EZMA, during the Wills Lifestyle India Fashion Week and also visited stalls of designers Rina Dhaka, Pankaj & Nidhi, Paras and Shalini among others.

"It was a great honour to have Mr. Ungaro with us at this season of India’s biggest fashion event, the Wills Lifestyle India Fashion Week. His ensembles created a stir in the revolutionary 80s with his understanding of sensuality, cuts and textures, which made his evening gowns a force to reckon with on the Red Carpet," said Mr. Sunil Sethi, President, FDCI.

"I'm delighted to be in India which is a country known for its myriad hues, embroideries and drapes," said Ungaro.

Ungaro, whose designs were a tribute to femininity, with a play of colour clashing and contrasts, had launched his label in Paris in 1965. But it was the master himself who taught a young Ungaro the nuances of design Cristobal Balenciaga. "There was nobody like Cristobal, he was a maverick. His cuts brought out the beauty of the female form," says Ungaro.