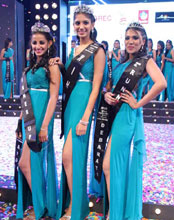 The quest for beauty is never ending, but this year's search for the face of Hyderabad culminated in a grand and glittering climax here at Novotel.

The grand finale of Miss Hyderabad 2014 presented by MAX and powered by KALAMANDIR was held at HICC Novotel in the presence of the who's who of city celebrity circuits. A packed hall rose in unison to applaud as Ms. Monika Thangalapalli was crowned 'Max Miss Hyderabad 2014'. Ms. Apoorva Srinivasan was crowned first runner-up and Ms. Debarati Das as second runner up­­.

The glitzy affair had the finalists judged in two formats i.e., pre-judging which had the panel of judges interacting with the contestants on one-to-one basis followed by final judging that took place on the stage.

Amidst excitement that was palpable and contagious all around, the pageant began with the bevy of beauties elegantly walking down the ramp in Indian traditional wear, done by Kalamandir. The second sequence had the finalists strutting through the catwalk in stunning Indo Western collection from MAX. Ten of the twenty finalists were shortlisted for the next round in this sequence.

Max Spring Summer Collection was showcased in the penultimate round. This sequence saw the girls being presented with the subtitles adjudged on the basis of presentation skills, communications skills, punctuality etc. Five of the girls who made to the final round exuded complete confidence in facing the battery of questions from the high powered jury, that followed.