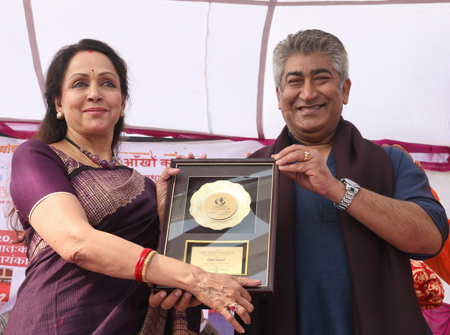 Through this initiative, Mahindru Foundation aims to address the issue of curable blindness and create awareness on treating blindness. These are the villages where the problem of cataract is most prominent as people are not aware about its treatment and suffer because of lack of access to easy healthcare facilities. Mahindru Foundation, which supports Gurgaon-based Arya Veer Netra Chikitsalaya and Y.P.Mahindru Niramaya Eye Bank, is committed to bridge the gap and spread awareness to bring light to people’s lives.

More than 3000 people of Kamar and its adjoining areas were screened at the Eye Camp over three days. Another major positive take away from the Camp is that nearly 100 people pledged their eyes for the noble cause.

Hema Malini, MP, Mathura Constituency said, “The cause of the blind is a very moving one. Imagine not experiencing life for a single day. It is difficult to imagine that nearly 1 crore 80 lakh people in India are blind. The tragedy is that 80 percent of the blind population can be cured. But because of lack of awareness and poor donation rate, they live in darkness and are deprived of the joys of life.”

Aanand Mahendroo, Director, Mahindru Foundation, said, “India has the dubious distinction of having the highest number of blind people in the world. I am deeply moved by this cause. Now Mahindru Foundation is dedicated to eradication of curable blindness and we have plans in opening 100 Eye Banks all over India. I appeal to all to pledge their eyes to support their endeavor in making India blind-free.”

Nardev Beniwal, Social Worker, Kamar Village,adds, “Many poor people in villages like Kamar are not even aware that they could see again if they undergo cataract operation. We are grateful to Hema Malini ji and Mahindru Foundation for organising the Eye Camp where it is needed most. I am certain it will benefit all the people in Kamar and surrounding villages.’’

Bharat Arya, President, Arya Veer Netra Chikitsalaya, said, “We are proud to pitch in for this cause. We have a long association with Mahindru Foundation, which has been supporting our hospital for ages now. Our doctors have the expertise in treating cataract and other eye ailments. Our best doctors and technicians is involved in treating the people of Kamar Village.’’

Doctors identified villagers who needed cataract operation to experience life again and a subsequent date given for the surgery to be done by Arya Veer Netra Chikitsalaya doctors in Gurgaon. Mahindru Foundation distributed medicines and spectacles free of cost to the poor as per suggestions of doctors.