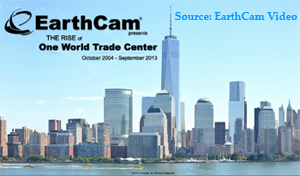 This One World Trade Center  is the 94-story super-tall structure fourth-tallest skyscraper in the world and the alternate given is 1 WTC Freedom Tower (pre-2009).

On July 4, 2004, the symbolic cornerstone of the One World Trade Center was laid in a ceremony and further construction work was stalled until 2006 as the project financing and design was not cleared.

The One World Center will be used as business Office, observation and communication center.

The location of the One World Center is 285 Fulton Street, Manhattan New York, 10007, United States.

The architects of the build are David Childs (Skidmore, Owings & Merrill) Daniel Libeskind (2002). The developer company of this building is Port Authority of New York and New Jersey.

The Main contractor for this work was Tishman Construction. The height of the building is 541 m, 546 m to tip.

Here is the video of construction of One World trade Center: