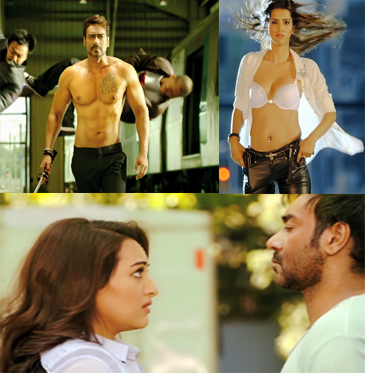 The trailer of the upcoming movie 'Action Jackson' was released 2 days back and within such a less time it received more than 4 millions views.

In this trailer you will find lots of actions and Ajay Devgn without wearing shirt. Romance and fun is also part of the trailer, which makes it very entertaining.

The 'Action Jackson' is the upcoming movie which is scheduled to be released on 05 December, 2014. In this film Ajay Devgn is in the title role. Other leads of the film are Sonakshi Sinha, Yami Gautam and Manasvi Mamgai.

The director of this movie is  Prabhudeva and the film is produced by Gordhan Tanwani and Sunil Lulla. The  'Action Jackson' is among the most awaited movie and expected to be released on 05 December 2014.

You must aware about the fact that this movie a remake of Telugu movie Dookudu.

Casts of the movie 'Action Jackson'

Here is the trailer of the movie 'Action Jackson':

This movie is a work of Baba Films production & Eros International. Movie is directed by the famous film director Prabhu Dheva. This film  'Action Jackson' is produced by Gordhan P Tanwani & Sunil Lulla.