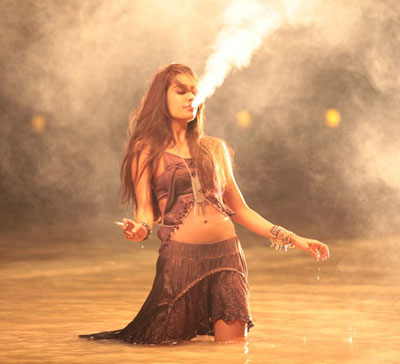 Mumbai, October 17, 2014: The upcoming comic caper ‘The Shaukeens’ is set to feature a series of chartbusters, and the makers are leaving no stone unturned in building up the anticipation. A song  titled ‘Manali Trance’ filmed on the incredibly sexy actress Lisa Haydon has just been released. ‘Manali Trance’ is the first original trance song in Bollywood, composed by Yo Yo Honey Singh and sung by Neha Kakkar & Lil Golu.

Judging by her performance and look in the video, it appears Lisa was the right choice for this milestone in the musician’s career. ‘Manali Trance’ is a trippy number shot in what appears to be a party going on in the backdrop. The video features Lisa in her hottest avatar ever as she trips on the incredible dubstep and trance music along with Sega dancers. Neha Kakkar’s voice along with Lil Golu makes the song something to look out for!

Yo Yo Honey Singh seems set to rule the charts with ‘Manali Trance’, which packs a solid punch right after his chartbuster ‘Alcoholic’, both from ‘The Shaukeens’.

'The Shaukeens' is a remake of 1982 comedy movie ‘Shaukeen’ directed by Basu Chatterjee. It stars Anupam Kher, Annu Kapoor, Piyush Mishra and Lisa Haydon along with Akshay Kumar in his most special appearance. Produced by Cine1 Studios, Cape Of Good Films & Ashwin Varde Productions and directed by Abhishek Sharma, the film is set to release on November 7, 2014.