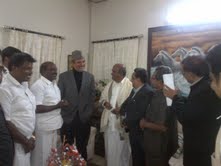 The Confederation of All India Traders (CAIT), apex body of the trading community has submitted a detailed representation to Union Health Minister Mr. Ghulam Nabi Azad during a meeting with him . Though Mr. Azad has assured the CAIT to defer the Act and to constitute a Joint Committee of senior Officials and CAIT representatives but in the absence of any notification of deferment so far, there is much panic among trading community of the Country since continuation of food trade without Registration will attract fine of Rs. 5 lakh and imprisonment for six months.

Leader of Opposition in Lok Sabha Smt. Sushma Swaraj and Dr. Murli Manohar Joshi, Chairman, Public Accounts Committee of Lok Sabha has already sent communications to Azad supporting the demand of deferment of the Act raised by CAIT. Union Law Minister Kapil Sibal in a deliberation held today with CAIT leaders informed that he has extensively discussed the issue with union Health Minister Gulam Nabi Azad who is convinced that the Act needs a re-look raised by CAIT, the Government will take necessary steps soon.

Both Mr. Bhartia and Mr. Khandelwal said that even for the lapses of the Government Agencies which are unable to maintain proper cleanliness in public areas, the food business operator will be penalized.” It is a mockery and an attempt to handover the food business in the Country to Multinational Companies “–said the trade leaders