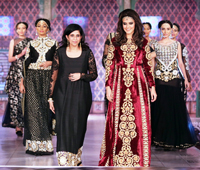 Bringing the grandeur, glamour and the craftsmanship from the land of the Nawabs, ace designer Niki Mahajan showcased her new couture collection at hotel Le Meridien, as she marked her return to the Couture ramp. The five segments of this collection which the show was divided into, namely- Ecru-Birth, Jewel-Adolescence, Vermilion-Wedding, Vintage-Exile, Noir-Death, each took inspiration from a different phase of the life of Begum Hazrat Mahal and intricately brought out the finer aspects of her life and journey. 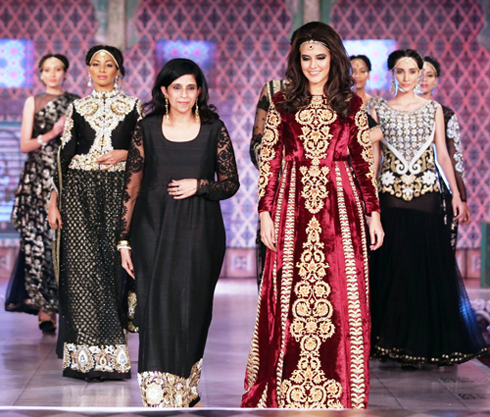 Niki takes her inspiration from a Woman who stood her ground when all else fled.

Her collection emphasised the fine art of Badla and Mukaish and was also inspired by the Begum's personality. In the starting of the show she used white, ivory and pastel blues to depict Hazrat's childhood and innocence. The latter half had a more sombre mood that depicted the phase of her life when she rebelled and then was exiled. In the end she uses a lot black which also highlights the fine Badla work, the essence of her collection. Through this collection she has reinvented the art of Badla and is hoping the show will help in reviving and promoting this age old craft from Lucknow.

Walking the ramp in a maroon velvet long coat with exquisite Badla work is the very stylish yet elegant actress, Neha Dhupia, who looked nothing but stunning and royal.

Speaking about her show & the collection, Niki said, "My collection is intended to be an ode to Begum HazratMahal. While she was an incredibly traditional and graceful queen she sets an example for today's generation through her fearless warrior attitude. That is what is showcased through my work as well. It stays true to tradition by focusing on fine Indian arts such as badla, Mukaish and Chickenkari in a strong, contemporary way through the designs. The show has been a thorough success which has motivated me further to continue creating designs with a unique inspiration."

The set beautifully done up in a vintage manner with a balcony, old jharokhas, windows & furniture further recreated the look of Lucknow, reminiscent of the olden times.