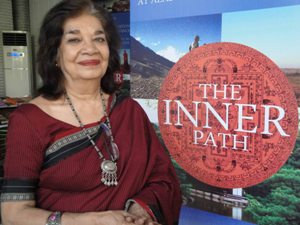 NETPAC announces the second Inner Path festival to celebrate Buddhism. The festival is being promoted by renowned film critic Aruna Vasudev, the pioneering president of the Network for Promotion of Asian Cinema

The Inner Path is organized by the Network for Promotion of Asian Cinema (NETPAC), and will be held from 6 to 10 September in the capital's Azad Bhavan (Indian Council of Cultural Relations). The Inner Path festival is being held in association with the Asoka Mission. NETPAC has helped organize festivals of films based on Buddhist themes twice since 1995.

The Festival will be inaugurated by the External affairs Minister, Mr. Salman Kurshid. The opening at Azad Bhavan will see a concert from the ‘Dharma Bums' an American band founded by Buddhist scholar Phil Void in the early 1970s while doing research in India and Nepal. The group will perform chants and spiritual renditions.

Addressing the Press Conference , Aruna Vasudev Director and Founder of Inner Path, said, "Our idea is to spread Buddhism in India, such festival have been happening internationally but they showcase only films This year we will present Buddhist philosophy and aesthetics through various creative forms - a concert from the western band, around 20 short and full length films, an exhibition of photographs of Buddhist sites, and selected art works, discourses and a panel discussion with the photographers and artist".

Inspired by the philosophy of Gautam Buddha that one has to find peace within oneself and not outside, the country's only international festival expounding thoughts of this great sage is being marked in ‘The Inner Path' on the basic theme of "Relevance of Buddhism today", in the context of the prevailing social, cultural and economic conditions in the world.

Kim Kum- pyoung, Director and Counselor Korean Cultural Centre said , "We started this centre in December last year for Indians. We hope to strengthen the diplomatic ties between India and Korea. He also added, "The Culture ties between the two Countries have been flourishing for more than 2000 years because of Buddhism."

The Inner Path Festival, the second in the country of his birth, is the first that brings together speakers and creative practitioners on Buddhism from around the world together with films and visual and performing arts.

Twenty-one features, documentaries, and shorts of which many have received huge critical acclaim will be screened. These include some classics like Spring Summer Fall Winter…and Spring by the eminent Kim Ki-Duk which is a South Korea/Germany production of 2003, Milarepa, by the legendary Liliana Cavani, Italy, 1974.

But the Festival goes beyond exhibitions, concerts and film shows. There will be daily Discourses by eminent Buddhist teachers and scholars to be followed by discussions, from 7 to 10 September. The invited speakers are His Eminence the 12th Kenting Tai Situpa, India; Prof. Askar Chingizovich Akmatov from Kyrgyzstan; Venerable Ajarn Suluk Sivaraksa from Thailand; and Dr. Rabindra Panth, the Director of the Nav Nalanda University, Bihar.

Sidharth Tagore, Art Konsult and Editor Art & Deal said, "We are extremely happy to present the exhibition which include a select range of photographs of Buddhist sites from the world as captured by three eminent international photographs – Nicholas Vreeland, Jaime Leon, Christel Pilz, and one Indian – Shefali Mujal.; we believe this show will bring peace and harmony as Buddhism preaches".

NETPAC (Network for the Promotion of Asian Cinema) is an international organisation with its Secretariat in Sri Lanka and Aruna Vasudev is its Founder-President. NETPAC-India has been actively promoting Asian cinema in India over many years. Aruna also founded the world's first Asian film journal ‘Cinemaya' and the Cinefan Festival of Asian and Arab Cinema.