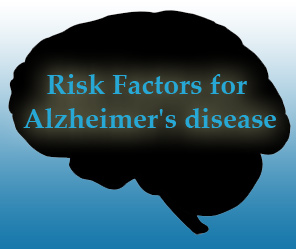 Alzheimer's disease, a type of progressive dementia to lead to complete memory loss and cognitive impairment is one of the most dreaded diseases and is increasingly becoming common in aged population across the globe. Here we would introduce the clinical definition, symptoms and risk factors of Alzheimer’s disease.

Along with Cancer Alzheimer’s disease is one of the most feared diseases of our time affecting millions of people all over the world. Though the disease is not immediately life threatening and though the progression of the disease can be checked or altered to a great extent if diagnosed early and given appropriate medical care and supervision, it is still one of the most frightening diseases to people. As the disease is increasingly becoming widespread all over the world, especially in aged population which is also on the rise, discussing and detecting the risk factors for Alzheimer’s disease is extremely crucial for our healthcare to take actionable steps to prevent it.

While the health implications for Alzheimer’s disease offers a really threatening picture with progressive damage to brain and nervous function and gradual loss of memory and cognitive faculties, the disease unlike cancer or other mostly irremediable disorders can be managed far better if detected early. But detecting the disease at the early stage remained still a big question for the medical community as the disease is known to cause no big syndromes except when it advances enough to cause short time memory loss and this aspect itself is the biggest challenge for the health practice. Let us now have a look at the clinical aspects, possible causes and risk factors for Alzheimer’s disease and how to prevent the onset of the disease with certain precautions and lifestyle habits.

What is Alzheimer’s disease? What are the principal symptoms?

Alzheimer’s disease is a type of dementia or slowly progressive neurological disorder that causes loss of memory, cognitive power, slows down and degenerates neuro-motor function to impair reasoning, perception, language, planning and thinking ability. The disease is normally detected in people aged 65 or more but according to experts the onset of the disease can be much earlier, even in middle age or late youth.

The symptoms of Alzheimer’s disease can be moderate to acute with the progression of the disease. Initially it can be perceived as reducing power of memory and brain functioning, but as the disease progresses it can lead to loss of short term memory, impairment or failure of cognitive power and finally can lead to completely impaired neurological function that would make the patient dependent on caregivers for simple livelihood responsibilities like dressing, eating food, going to toilet, etc. Alzheimer’s disease progresses with the damage of brain cells and still this cannot be cured as far as curative approach is concerned except a slowing down the progress of the disease or altering the progress wherever applicable. Though Alzheimer’s disease is more common in older population above the age group of 65, nowadays thanks to overstressed living and derogatory lifestyle habits symptoms of dementia or impaired memory and logical understanding is increasingly becoming common in people much before they actually reach old age.

In explaining the causes and risk factors for Alzheimer’s disease we must begin with the age factor which in spite of any amount of progress made in addressing the disease medically will remain the same, simply because of natural weakening and derogation of our memory and cognitive faculties in old age. A type of protein called Beta Amyloid is held responsible for building up plaques in the brain and nerve cells leading to dementia and gradual onset of Alzheimer’s disease.

It has been seen that in most of the cases people detected with Alzheimer’s disease are having another major health problem, particularly heart disorder or diabetes. It is also widely accepted as a medical truth that whatever is good for heart is also good for the brain and naturally heart healthy lifestyle or diet can be better to prevent the onset of Alzheimer’s in older age as well. With this underlying connection between heart disorder and Alzheimer’s disease in mind we can conclude on an array of healthy lifestyle adjustments to prevent both the diseases. Here below we provide some of the major risk factors for Alzheimer’s disease in brief.