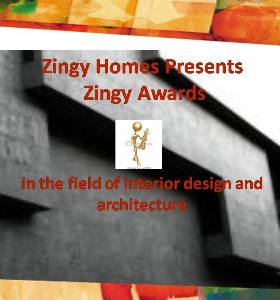 Zingy Homes is organizing an online award event to recognize and honor interior designers and architects who have been working behind the scenes incessantly and creating beautiful spaces for us to live and work in. The awards will be announced online by the end of October.

Zingy Awards is an initiative to provide a platform to help architects and interior designers gain visibility in the mainstream. The awards will be adjudged for the following categories: Best Commercial Architect, Best Commercial Interior Designer, Best Residential Architect, and Best Residential Interior Designer. Both firms and individuals can apply before October 5th 2013 to participate in the contest. The applicants may submit more than one project and apply for multiple categories. The jury panel features award winning professionals with years of experience in design and architecture. They are Karsten Gori and Uffe Leth from Denmark, David Hotson from US and Royston Wilson from Australia. Apart from a stellar jury that comprises award winning architects, the unique feature of this online awards program is the public voting module which means that each entry will also be ranked by the number of votes it receives from the general public. The judging parameters are design excellence and suitability to challenge, creativity and originality, functionality, problem solving ability, sustainability, aesthetic appeal and last but not the least-execution and finish quality.

Zingy Awards are oriented towards encouragement in the field of art and architecture. As the founders say, the idea is to have the general public recognize their work just as easily as they recognize a Manish Malhotra or a Hussain. With the public voting feature, Zingy Awards is being billed as a platform that would bring lakhs of homeowners in direct touch with the participating architects and designers. The community feels that these awards will act as a catalyst and motivate more professionals to bring in new innovation and out-of-the-box approach which in turn will bring them more visibility and popularity. The project listings will remain on the site even after the awards program is over.

To sum up, for an architect or interior designer, participation in the Zingy Awards might help gain competitive edge over several others in the row. With their names pinned on the wall of fame, they would be easily approachable to customers across the country. Also, it would uncover better options for various homeowners when it comes to finding the best professionals for home remodeling and renovation.