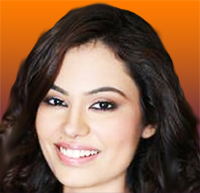 Faridabad girl Srishti Rana made India proud by winning the India at the international beauty pageant Miss Asia Pacific World 2013 leaving behind 49 other contestants to clinch the title.

"This is a dream come true! I am very proud of myself right now and still can't believe that I have won the crown," said the 21-year-old, who thanked god, family and friends, among others, soon after the victory in a statement.

This is for the second consecutive time an Indian face has won this title with India'a Himangini Singh Yadu winning the title last year.

Srishti is a graduate in Journalism and Mass Communication and the big day for her came Wednesday when she was crowned with the prestigious title of Miss Asia Pacific World 2013 by her country mate and last year's winner Himangini in Korea.

Miriam George from Egypt and Evgenia Klishina from Kazakhstan were placed second and third in the pageant.

Earlier also, India's Zeenat Aman and Dia Mirza has won the prestigious title in the year 1970 and 2000 respectively.