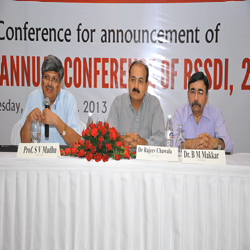 The Research Society for the Study of Diabetes in India (RSSDI) has announced its National Annual Conference for 2013, scheduled to be held from November 8-10, 2013. The conference will see a gathering of top experts from across the country and will unfold new findings and studies in the field of diabetes based on researches.

As part of its efforts to augment research and advocacy, RSSDI is undertaking a major country-wide research project to find indigenous ways to cut the risks of diabetes and prevent the growing population of prediabetics from acquiring type 2 diabetes.

Needless to say, with more than 63 million diabetic patients, India is second only to China in the number of people living with the ailment. With a racial predisposition to diabetes and rapidly changing lifestyles, India is certainly on course to become the diabetes capital of the world. What is more worrying is that we have 77 millions prediabetic, one third of whom may get converted to diabetes if preventive strategies are not implemented. However, the concept of preventive measures has still not taken root in the Indian society.

The Indian Prevention of Diabetes Study (IPDS) being conducted across five centers in India – Bangalore, Mumbai, Pudducherry, Hyderabad and being coordinated from Delhi (the nodal centre) by Dr Madhu – would analyze the long term impact of administration of fenugreek powder and adoption of a fixed yoga module in preventing diabetes. The study being conducted on 1500 subjects over three years is aimed at finding the benefits of yoga in preventing prediabetics from advancing to a higher stage of diabetes.

On the occasion, Dr Rajeev Chawla, Organizing Secretary, RSSDI given its heredity run, diabetes can “run in families". Researchers believe that certain genes affecting immune response can play a role in the development of type 1 diabetes, while genes affecting insulin function can contribute to the development of type 2 diabetes, Indians as a race are believed to have a greater insulin resistance and hence a predisposition towards type 2 diabetes.

Dr. B.M. Makkar, Honorary Treasurer, RSSDI said that the survey found that despite obesity being a major driver to type 2 diabetes, the level of awareness among overweight people was dangerously abysmal. Only 6-10 pc knew that they were overweight while almost 90 pc did not even admit they had a problem with weight.

Dr Madhu, Head, Department of Endocrinology & Medicine, University College of Medical Sciences and GTB Hospital, Delhi said that to address these issues of concern, it is crucial to promote more and more local research in the country and analyze our findings in the local context, rather than depending on western studies. Our annual conference is a major step in that direction and through our platform many credible findings have emerged over the years.