Nothing beats a child's smile when it comes to true happiness: Telegraph reports 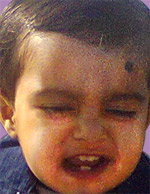 A leading English Newspaper of Australia 'Daily Telegraph' has reported that according to the latest survey, Australians derive true happiness by simply looking at their children's smile.

According to Daily Telegraph, an exclusive survey has found that Australians are a happy bunch overall, thanks largely to their children, loving partners and good friends.

The survey, in which around 2,000 persons participated, reveals that 56.8 percent respondents insisted that their children gave them the most joy while 50.3 per cent said favoured to their partners.

The survey, which was based on a scale from from "extremely happy" to "extremely unhappy" also revealed that three in five or 59.3 per cent, ranked spending time with friends highly.

'63.1 per cent respondents said more money might make them even happier while some said extra holidays and rest of them asserted to better health', the Daily Telegraph reported.

Almost 70 per cent considered themselves happy people but opinions were evenly divided when it came to whether married or unmarried people were happier or which gender was more cheerful.

44 per cent asserted that money could buy happiness, 45 percent said it couldn't and 11.1 per cent were undecided. For 54.4 per cent of people those little bundles of joy are just that, while 45.6 per cent said childless people were happier.

Baby boomers were believed to be the happiest age group.