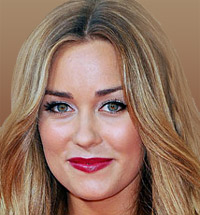 Television personality and fashion designer Lauren Conrad asserts that she would never go for cosmetic surgery.

The celebrated fashion designer, who shot to fame on TV series 'Laguna Beach', says that she is unlikely to go under knife as she loves to look "natural".

''Personally, I have always preferred a more natural look. That is what is more attractive to me, but it's up to each person. As long as you are doing it for you, because you want to look nice and that's the result you are going for, then that's fine,'' Contactmusic quoted her as saying Look magazine.

Though Conrad, who has now penned her first book 'The Fame Game', says she does feel under pressure to always look her best because she always remains in the spotlight.

''There is always pressure to work out a little harder when all eyes are on you. I don't think I ever felt the pressure as much as some people, but it was definitely at the back of my mind,'' the 26 year old has beenquoted as saying.

--with Inputs from ANI