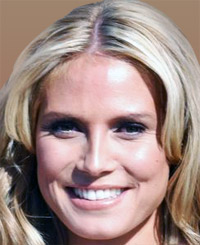 Model and actress Heidi has filed for divorce. This decision came nearly three months after announcing her separation from Seal.

According to the People magazine reports a petition based on irreconcilable differences was filed on Friday afternoon in Los Angeles Superior Court.

The couple had married in 2005 and has four children. The announcement of their separation was made in January by issuing a joint statement that said: "While we have enjoyed seven very loving, loyal and happy years of marriage, after much soul-searching we have decided to separate.

"We have had the deepest respect for one another throughout our relationship and continue to love each other very much, but we have grown apart," the pair said at the time.

The super model is looking for joint legal custody, but primary physical custody of their four children, with visitation rights for the singer.

The 38-year-old is also seeking to have her maiden name restored.