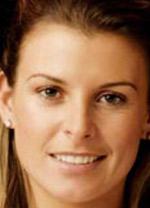 Coleen Rooney enjoyed an intimate dinner with husband Wayne for her 26th birthday. This move has surprised everyone as she is better recognized as someone who organizes wild parties.

The wife of English football star tweeted a picture of her birthday dinner on Tuesday night with Wayne Rooney under the heading, "Had a lovely birthday!! Thanks so much for all my lovely birthday wishes!!"

The Manchester United football star appeared gracious in a grey blazer with a matching jumper and the birthday girl also looked gorgeous in a silver dress with hoop earrings, says a report published in the Mirror.

This kind of celebration was a huge contrast to Coleen's bash on Friday night at their Cheshire mansion, where a camel grabbed maximum eye balls.

Bringing a camel to the venue surprised everyone and they were in a complete shock to know that camel was the guest of honour.

Actually this arrangement was the part of Arabian-themed party to mark the milestone and guests arrived in belly-baring costumes, complete with burkas typical of Arabs.

Coleen's neighbour Alex Connock posted the picture of the camel being taken to the famous couple's residence on twitter under the slogan, "News flash - party at the Rooney household tonight and someone's turned up with a camel. I kid you not."

"#Twitter an awesome tool for pointlessness. Jog past @waynerooney house as he has camel delivered. 50 retweets of my pic by time I get home," he said