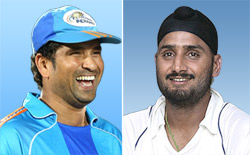 Master blaster Sachin Tendulkar won't lead the Mumbai Indians in the IPL 5 and management of team has handed over the captaincy to ace spinner Harbhajan Singh. Batsman Rohit Sharma will be the vice-captain of the team in IPL 2012.

Sachin's decision to quit captaincy has surprised everyone but team management has not given any specific reason to this. However Harbhajan Singh has said that Tendulkar spoke to him regarding this decision and he is feeling honored to lead the Mumbai Indians in a big tournament like this. The spinner also thanked Nita Ambani and Sachin for giving him this responsibility.

Harbhajan also said that Tendulkar's decision to quit captaincy won't affect much the team as he will continue to be the main guiding force for the team.