Jannat 2: A Crime thriller based on gun trade 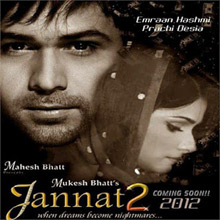 Directed by Kunal Deshmukh, Jannat 2 is crime thriller. The film is produced by Mahesh and Mukesh Bhatt and is a sequel of 2008 film. The film stars Emraan Hashmi, Randeep Hooda, Imran Zahid and Esha Gupta and speaks volumes about changing face of gun trade. After doing a successful stint as a serial kisser Emraan Hashmi has stated acting of late.

Like various other films of Mahesh Bhatt, Jannat 2 too is well researched. While researching the subject the makers of Jannat 2 got to know that nawabs and kings had recruited skilled artisans to make arms for them in order to fight frequent wars which British banned in order to have complete control over arms and ammunition in India. Power structure in India changed, British returned home. Few decades earlier demands of arms increased, the next generation of artisans tapped their skills to make a place for themselves in prospering illegal trade.

In Jannat 2 Emraan Hashmi is starred with Eesha Gupta. Randeep Hooda also plays an important role in the film. The release date of Jannat 2 is 4 May, 2012. It is only when audience will get to see the story unfolding.

In the meanwhile music of Jannat 2 has been released. Melodious music is the strength of films of Bhatt camp and this film too does not disappoints listeners. Music director Pritam Chakraborty has done good job while lyricist Sayeed Quadri has poured emotions in words. Famous play back singers of industry Shafqat Amanat Ali, Rahat Fateh Ali Khan, KK, Mohit Chauhan, Javed Ali, Nikhil D'Souza and Anupam Amod has given their voice for the songs of Jannat 2.