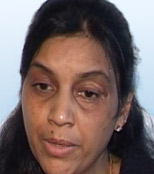 Refusing to give stay order to Arushi-Hemraj twin murder case co-accused Nupur Talwar, the Supreme Court today ordered her to surrender before the session court.

The Apex Court's order came in hearing the plea filled by Nupur to quash the order of Ghaziabad session court, which has issued non-bailable warrant against Nupur Talwar for continuously dishonoring court's order to appear in the court for trial.

Hearing the petition, a bench of two Justices A K Patnaik and J S Khehar directed Nupur Talwar to surrender before the trial court on Monday.

However, the court also stated that if she surrenders before the Ghaziabad Court, she can ask for bail from the court and court may also consider on her bail application. But, it will be possible only when she surrenders.

The SC also gave the example of her husband Rajesh Talwar's bail who is also co-accused with his wife.