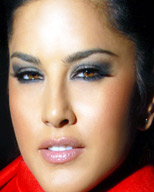 She has signed a deal with a cellular company 'Chaze' and now she is its brand ambassador.

However, the price of the deal has not been revealed.

According to media source, Sunny Leone has recently completed her first television commercial for Chaze and shot for it in Bangkok.

"I am really impressed by their ideology of bringing out mobile technology for the masses and personally feel connected with their vision," said the 30-year-old.