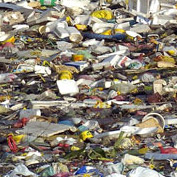 A recent study says that tonnes of plastic waste that are jostled into the ocean can have adverse effect on the environment.

Working on a research sailboat sailing over the Pacific Ocean, oceanographer Giora Proskurowski noticed that the water of the ocean was scattered with numerous small-size pieces of plastic debris, when wind picked up and most of the particles disappeared from the sight.

After examining the samples of water at a depth of 16 feet, Proskurowski, researcher at the University of Washington, found that wind was pushing the lightweight plastic particles present on the surface of the sea below the surface.

Proskurowski quoted to the journal Geophysical Research Letters that decades of research into how much plastic litters the ocean, carried out by skimming the surface only, may in some cases vastly underestimate the true quantity of plastic debris in the oceans in some cases.

Plastic waste present in the oceans is a matter of prime concern as it may have adverse effect on the environment. For instance, if a fish eat those plastics, they may degrade the function of their liver, said a university statement.

In addition to that, these plastics provide favourable conditions to the bacteria to grow, that are then transported to other parts of the ocean to the different parts of the world, which may cause severe problems.

Proskurowski and study co-author Tobias Kukulka, University of Delaware, said that the data gathered from just the surface of the water generally underestimates the total amount of plastic in the water by an average factor of 2.5. However, in high winds, the volume of plastic can be underestimated by a factor of 27.

Proskurowski collected data on a 2010 North Atlantic exploration, where he and his team collected samples at the surface as well as from three or four depths down as far as 100 feet. "Almost every tow we did contained plastic, regardless of the depth," he said.

By adding the data with wind measurements, Proskurowski and his co-authors developed a simple mathematical model that could be used successfully to match historical weather data, gathered by satellite, with previous surface sampling to more precisely determine the amount of plastic in the oceans.

Descriptions of the great Pacific garbage in news reports may have led many people to imagine a giant, dense island of garbage but the actual fact is the patch is made up of widely dispersed, small-size pieces of debris, Proskurowski said.

The only way out of this problem can be that our old plastic should be replaced with oxo-biodegradable plastic so that it becomes biodegradable in open environment in the same way as a leaf.

UAE has already banned plastic products except oxo-biodegradable plastics( February, 2012). Oxo-biodegradable plastics are those which biodegrades in the presence of oxygen in a timescale which can be approximately determined by the chemical formulations which is added to normal plastic at the extrusion stage. The chemical formulation which can be added to normal plastic is symphony's d2w technology. Symphony is a British public company, listed on the London Stock Exchange. Also, because Oxo-biodegradable plastics can be manufactured by local factories therefore there will be no loss of jobs. The technology is not expensive at all.

It is unfair to burden our children and grandchildren with this problem as there is something we can and should now be doing about it.